The following is our Potasnik family history, the text of which is courtesy of David (Porter) Potasnik who had the good sense to transcribe it on April 7, 2000 as told by Aunt Ethel Benjamin Auskern. The photo of Solomon was provided by Brian and Alfred Franklin. The photo of Charles and Dora was provided by Wendy Potasnik. Carol Greenberg. Dora (Potasnik) Brook made the other photos available.

In a small shtetl called Zabretan, outside of Vilna in Poland, our Grandfather, Solomon Potashnik and Grandmother Cecil owned a small parcel of land on which was a tavern, an apple orchard. They lived in the rooms upstairs over the tavern. They had a cow which supplied them with milk and cream and butter. And they also had a few chickens, a horse and a wagon. To help make a living our grandfather would go to market and barter for dress goods and other necessities of life . They had eight children: Uncle Channie (Louis), the oldest son, who was studying to be a doctor, Sara Leah the oldest daughter, Faga, Charles (my father), Bessy, Carl, Jacob and Sam.

Grandpa Solomon was a member of the Vilna Garbarna (or Society) comprised of people from the same shtetl who had already come to America and settled on the lower East Side of New York City and who were willing to help their lansmen to get settled when they came to the new world. In the year 1880 Solomon Potashnik, our grandfather, came to America all alone - on steerage of course - to find the gold on the streets of the new world.

Before leaving Zabretan, the shtetl where he lived, he contacted his lansman in New York who met him at Castle Garden which was the landing place for the immigrants before Ellis Island was opened. They took him to a place of lodging, to a bathhouse and loaned him enough money for a week or so to enable him to get started on earning a living. He rented a pushcart and went to the Fulton Fish Market to start a fish business on Hester Street. With the proceeds he rented a room to live in. Besides his necessities of life he spent very little in order to save money to send home.

After about one and a half years he saved enough money to enable his oldest son Channa and his young wife Sara Leah to come to America. When they arrived, Solomon rented a flat where the three could live together. In order to make a living, Uncle Channa had to abandon his dream of becoming a doctor. Instead he became a barber. Of course, when we say they rented an apartment picture a railroad flat of three rooms, no heat or hot water, a bathroom in the hall that was shared by other families . And in order to take a bath, you went to the public baths in the neighborhood which cost a few pennies. 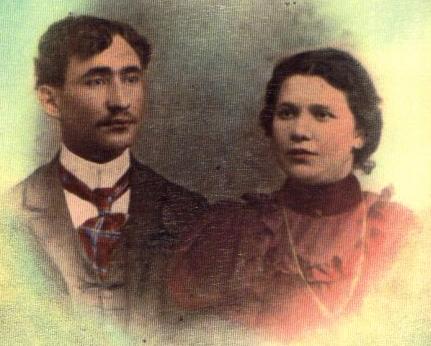 Again, Grandpa Solomon, Uncle Channi and his wife began sending home money from their very meager earnings to enable their sister Sara Leah and her husband Abraham Seigal and their three children, Bessie, Eddie and Bertha to come to New York City. Of course, they also had to rent a home in the lower East Side. Seigal got a job in a mattress factory through a relative and that was his work for the rest of his life. Tanta Faga came next. She was about eighteen years old and got a job sewing in a factory. Tanta Faga was Harriet's mother. Charles came next, age twenty, and also got a job making mattresses. He married Dora Krisovsky, my mother, who was a sister to Channa's wife, Sara Leah. Bessie came next, age fifteen, and also, like the rest of the girls, got a job sewing.

You understand everyone contributed to the next one's passage to America. She married Alfred Shear, a tailor, a few years later. By this time there was enough money sent to Europe to enable Bubby Cecil, our grandmother, and the three youngest boys, Carl, Sam and Jake to come over, and now the whole family was together in America. All the older children were married by this time and had families, and Grandpa and Grandma were left with the three younger boys who got jobs making wire frames for hats.

The mattress factory, owned by Uncle Seigal's brother in law, expanded and moved to Yonkers. And in order to have jobs, Charles, Abraham Seigal, and Louie Krishinsky, Tanta Faga's husband, moved to Yonkers. Slowly, the rest of the clan came here and were in Yonkers for many, many years. Eventually, Louie Krishinsky, who was really an upholsterer, opened an upholstery shop. He was Tanta Faga's husband. Charles opened a second hand furniture store, Alfred Shear opened a cleaning and tailoring store, and Uncle Channi and Uncle Jake opened a barber supply business. Uncle Carl disappeared. No one knows what became of him. Uncle Sam went to Detroit where he married and spent the rest of his life.

Following are the children of the original Potashnik's. Uncle Channi and Sara Leah Krisovsky Potashnik had six children: Charles, Max, Rose, Barny, Ethel and Jake. Aunt Sara Leah and Abraham Seigal had Bessie, Edward, Bertha, Louie, Sophie, Irving, Jesse and Harold. Tanta Faga and Uncle Louie Krishinsky had Harriet, Jack, Zelda, and Jenny who died at the age of seventeen of typhoid fever. Charles and Dora had Benny, Lilly, Faly who died when she was six years old, Sidney, Ethel, Stella, Bess (affectionately known as Bashie), and a set of twin girls who died when they were one day old. Bessie and Albert Shear had Jack, Gertrude, Celia, Solly who died in an automobile accident at the age of eleven, and Harold. As for Carl, no one ever heard any more about him. Jake and Bertha Potashnik were divorced and had one daughter, Stella. Sam and Ester Potashnik lived in Detroit and had Cecil, Myra and Sylvan. And so dear children, these are your roots of the Potashnik family as we recall them, March 31, 1979, Ethel Potashnik Benjamin Auskern and Harriet Bonner.

We love you, and we hope this family goes from strength to strength with much love between you, as you are one big wonderful clan.